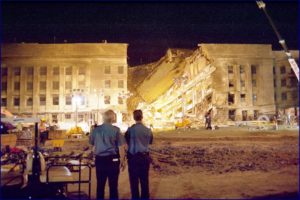 On September 11, 2001, Arlington County Police officers responded to the Pentagon to face one of the most horrific acts of terrorism this nation has ever experienced. Since 2001, Arlington County has enhanced our public safety response capabilities. As a result, today, we are stronger, and better prepared for any event, than ever. While we are enhancing public safety readiness, the Arlington County Police Department recognizes the value residents, visitors and businesses play as an extra set of eyes and ears in our community. If you see something, say something® – report possible safety or security concerns to law enforcement for investigation.

Report suspicious activity by contacting the Emergency Communications Center at 703-558-2222 or 9-1-1 in an emergency.

The See Something, Say Something® Campaign

“If you See Something, Say Something®” is a national anti-terrorism campaign, launched by the U.S. Department of Homeland Security, that raises public awareness of the indicators of terrorism and terrorism-related crime, as well as the importance of reporting suspicious activity to law enforcement.

The Arlington County Police Department’s Homeland Security Section leads efforts within the agency to detect, prevent and investigate terrorist activities that may affect Arlington County and the National Capital Region. The Section collaborates with other law enforcement and intelligence agencies, sharing and compiling intelligence data and provides training and safety awareness to police personnel and the community. The Section also assigns officers to the FBI Joint Terrorism Task Force (National Capital Region), so that Arlington remains informed and connected with our regional law enforcement partners.

Efforts to address crime and threats in our community are most effective when they involve strong collaboration and partnerships between law enforcement and the communities and citizens they serve. That’s why police encourage the public to remain aware of your surroundings at all times. While we share everyday moments with our neighbors, family, coworkers, and friends, we all have routines that are uniquely our own making you most well-acquainted with what activities may be suspicious in your neighborhood and communities.

While remaining aware of your surroundings should be part of our everyday, there are areas where residents are encouraged to remain particularly vigilant. These areas include special events or activities in which large crowds of people typically gather such as shopping centers, restaurant districts, religious services, and public transportation hubs to name a few.

Factors such as race, ethnicity, national origin, or religious affiliation are not suspicious. The public should report only suspicious behavior and situations rather than beliefs, thoughts, ideas, expressions, associations, or speech unrelated to terrorism or other criminal activity. Suspicious person(s), items, vehicles, and unattended packages should be reported to the police immediately.